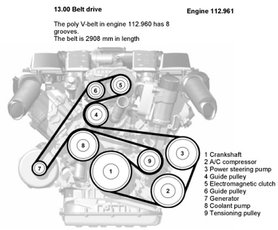 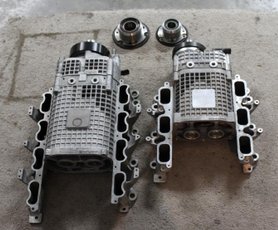 Photo above show a comparison between the V8 supercharger (left) and the V6 supercharger (right). Size vs. weight vs. output vs. gas mileage... a lot of things to discuss.

Photo above: Schematic of how the belt is working together with the supercharger (5). Beltslippage can occur, hence aftermarket pulley saver kits (PSK) and belt wrap kits (BWK) are available. See CrossfireMarket for more details. 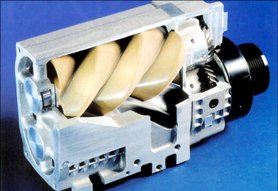 Picture C: A drawing showing the internals of a supercharger. 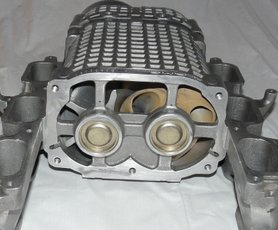 Picture D: Glimse of the internals of a IHI S105 Supercharger. 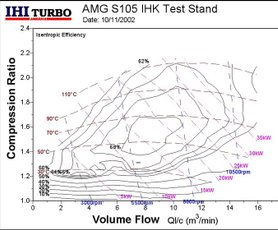 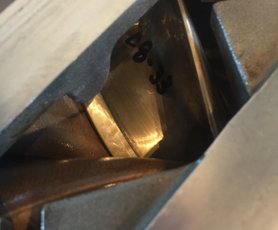 Video 1 above: Waldig carrying out testings to see when the SRT-6 supercharger is engaging. 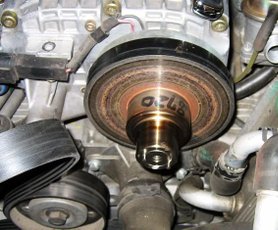 Unlike the Roots-type Eaton blower used on the supercharged Mercedes four cylinder engines, the 260kW engine uses a very sophisticated Lysholm-type supercharger produced by IHI in Japan. Driven at 3.3 times crankshaft speed, the helical lobe supercharger develops up to 1 Bar (14.5 psi) of boost. One of its two cast aluminum rotors is Teflon-coated (it's the yellow one), and the supercharger drive is through an air-conditioning style electromagnetic clutch. Despite the high efficiency of this design of supercharger, the blower still requires 45kW to power it when the engine is at its 6220 max rpm. Of course, the blower is also then flowing a lot of air - up to 1200kg per hour of it, in fact.

In order that the supercharger could be fitted into the already tight confines of the R170 bodies, it has been mounted within the 'V' of the V6. Sandwiched between the supercharger and the inlet manifold is a reverse-flow heat exchanger for a water/air intercooling system. Aimed specifically at reducing temperature peaks (an area where Mercedes-AMG engineers believe that an air/air system can be less effective), the system has its own radiator and electric water pump. The complete supercharger and intercooler system adds only 25kg of mass - so the power/weight ratios of the two cars equipped with the upgraded drivetrain are radically improved!

The supercharger engages only as required; when it is not being driven, the intake air flows through its rotors (i.e. no external bypass is fitted). Supercharger operation is dictated by the Bosch ME 2.8.1 engine management system on the basis of engine speed and load. However, the supercharger, which is driven from the engine's serpentine belt, will not engage at engine speeds over 3000 rpm - if this occurred, the belt stresses would be too high. If required, the engine can develop 400Nm from 2300 rpm to 6100 rpm. Thankfully, the better breathing and engagement-on-demand characteristics of the supercharger have not turned the engine into a polluting and thirsty monster. The Supercharger maximum rpm is around 20.000 rpm but safe maximum value to keep the life of the supercharger is about 15.500 rpm. Read more about this [HERE].

LOOKING FOR A SPARE SUPERCHARGER FOR YOUR SRT-6?

In the beginning NEW superchargers were available to buy from IHI distributors. Quote from Judy, Sales/marketing at IHI Turbo America in 07-24-2004. “The S105 is available from IHI Japan. Delivery time for this unit is 4 months. You will have to purchase this unit though one of our Distributors. A list can be found on our website www.ihi-turbo.com …” Note the date of the quote, it was HDDP and others on the CrossfireForum who were checking the specifics on the supercharger that would soon be mounted on the Chrysler Crossfire SRT-6.

Today, the S105 are not available to buy NEW. The SRT-6 pacemaker is a rarity but if you are lucky and search thoroughly, you may get your hands on one, after having spent about 1500-4000 USD. Cost will vary depending on what parts (IC, Manifolds, SC Pulley etc.) that will end up in your deal but be ready to cough up some cash. As Mercedes SLK32 AMG and C32 AMG uses the same supercharger as in our Chrysler Crossfire SRT-6, the chance of finding one is at least better. Check both USA and European markets, but surely, start off by checking SRT-6.com own CrossfireMarket.

Changing supercharger oil and/or swapping out a supercharger pulley are no big deal. Check the DIY section for more information. But if you are unlucky and get oil leakage behind the black magnet you will as of today not find a DIY to fix this. Even Rob at NeedSwings cannot get gaskets to the front of the supercharger. We are currently investigating on what bearings/seals that is needed to be changed, stay tuned. However, there is hope and help to be found elsewhere. PSE Superchargers quote 1.695,00 USD for a fully remanufactured supercharger and your core must be shipped in for remanufacture.

"This Supercharger and all IHI’s are very complicated. We have no problem remanufacturing these as we have a great process used to remove and re secure the new bearing in place. Currently we are looking at a 30day lead time for the next available rebuild for your style of Supercharger. We are the only authorized Mercedes remanufacturing company for these Superchargers manufactured by either Eaton Corp or IHI Japan and have all of the original service parts in stock."

The supercharger is off when:

The supercharger is on (has the clutch power on) when:

It stays on until:

See video 1 in the right column.

When removing the intercooler (IC) from the supercharger (SC) I could see the internals of the SC and noticed a numbering on the rotor blades. It said "C8-33" and what it indicates will probably forever be unknown. Also on the snout / mounting rod, a number have been written, "8720".

Copyright (©) 2012-2015 A&P Ltd. for www.srt-6.com. All rights reserved. This is NOT an official Daimler / Chrysler / Mercedes Benz / Street and Racing Technology website.Disclaimer: Material on www. srt-6 .com is protected and should not be misused.